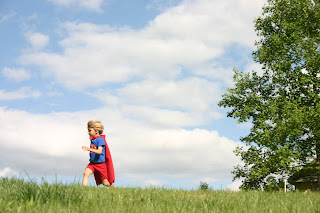 As you all know...Boy loves wearing his cape. He wears a cape to sleep. I sneak in and take it off (always worried he might strangle himself while sleeping ;))...but the minute he wakes up, in his sleepy haze, he finds it and puts it back on.
I don't let him wear it to school though. To school he wears a collared shirt and pants and shoes and socks. I just want him to get into the habit of putting his best foot forward at school...and I also like how cute he looks in normal clothes. He immediately puts his Superman stuff on when he gets home though (provided he gets a "red apple", which he always does because he is my good boy).
Today when I walked into his classroom and hung his Superman backpack on his peg...he walked up to me with a foam square that had once held the letter "s". (you know, the foam letters that fit together like puzzles?). Anyway, he was holding this to his chest. He then went to the kitchen center and grabbed a Lowes Hardware apron and put it on backwards to create a cape for himself. My first thought was "how clever." My second thought was "really, you are going to hold that "s" to your chest?" And he did...at least until I left.
What a very silly little boy I have!!!
I LOVE IT!!!
Posted by TheLFamily at 7:40 PM