Happy New Year! We brought in the New Year Southern style...with a feast of black eyed peas and skillet cornbread. New Year's Eve was less eventful and involved delicious Mexican food and Sherlock Holmes for Daddy and me. We came home to a quiet house, but we fell asleep before midnight.
With this year brings many resolutions...of the usual fashion involving our bodies, diet, organization, savings acct, bill pay and spiritual life. I also hope I can be part time by next year, but I may need to continue waiting for that until Daddy has his PhD.
I can say that ALMOST my entire house is organized....I keep putting off my bedroom and closet...but I promise that by next week, it will be done.
I haven't missed a day of running...of course, its only day 2.

So...some exciting things to start off the New Year...my mom found TWO Windsor chairs on the side of the road. I am not sure if I have ever mentioned my obsession with Windsor chairs, but I have one.
I also did my Saturday garage sale-ing. I didn't think New Years Eve would have much going on, but my cousin wanted to go, so I planned for it...only to have her tired little self bail on me. So...I got my chai tea latte and checked craigslist on my Droid for a sale nearby. I only went to ONE. BUT, I found a New in box pair of Five Finger Vibrams, in my size for $20 and a slew of Clemson Nike running attire in my size as well. Consider that a sign from God that the new year running resolution was not supposed to be halted when the summer heat strikes again....

I intend to write for an hour twice a week. I won't elaborate more on this, but for now...I am on track.

No lets talk a bit about these Vibrams: 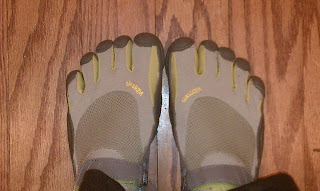 I have been wanting a pair of these babies for a very long time. I tried a pair on in Oregon, but the price was just not right for something I wasn't sure I would love (hence my good bargain)...a friend of mine in Florida swears by them, so tonight, I decided to give them a whirl.
My toes have not memorized getting into them yet (I am assured that they will), but putting them on resembles trying to put a glove on a one year old child (or a 3 year old Bluebird...another story but lets just say it tries my patience).
I decided to really make these Vibrams prove themselves...and I think they did. The run was awful but that was due to the bitter cold and God awful wind...you know those kind of runs where you taste the blood in your throat? Yea, that is how bad it was. BUT, my feet felt great. I actually felt that I was able to climb hills better, and the shoes kept my comfortable even on some pretty rough terrain.
So...I think I will be wearing them for my run again tomorrow...but praying for less wind and need to remember to wear my gloves.

Tonight the hubs and I played three games of Yahtzee (another resolution involving more quality time and less TV). I won all three...

The moral of that story, sometimes focusing on the small deals adds up for a bigger win in the end!
Posted by TheLFamily at 5:07 PM