UBUNTU , Rainbow Fish and My Boy 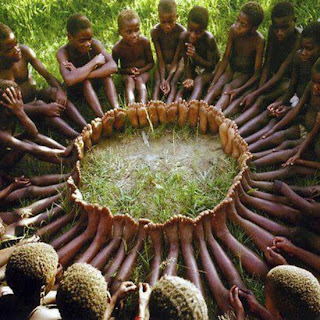 An anthropologist proposed a game to the children of an African tribe. He put a basket of fruit near a tree and told them that whoever came first would win all the fruit. When given the signal to run, the children held hands and ran, sitting down together to enjoy the prize. When asked why they had run together, if only one could get all the fruit, they said, UBUNTU, how could one of us be happy if everyone else is sad? UBUNTU in Xhosa culture means: ”I am because we are"

So, I posted the above post a few days ago...its a beautiful image and a wonderful little story...I thought that for the post I plan to write today, that I would just expound on that since they sort of relate.

Boy has autism. I don't write about it much. Why? Not because I am ashamed. In fact, accepting autism was indeed difficult for me, until I realized that the diagnosis did not change who he was and what he was to me...he was still my Boy, my smart sweet beautiful Boy...instead, the diagnosis actually helped me to understand him more and I am a better mother to him with the knowledge.

I don't write much about it because I want him to have memories of a happy childhood and I am worried that if he ever read something like I am posting now, he may start thinking his childhood was not as good as it really is. No child could be loved more and I want that to be what he carries with him through life.

Boy is extremely bright, high functioning and in normal classroom setting. His challenges pertain to relating to others. He is extremely affectionate and he loves his friends and he wants to play and have play dates just like all the others. He does tend to be more one sided in his play and he does not always know where play ends and real life begins. When kids hit and rough house, he tried to join, but sometimes gets too rough, or takes it personally when they hit him or say mean things.
He remembers everything, to the point that we are often shocked by the span of his memory. He doesn't shrug things off the way many kids do, and he can be quite sensitive. In fact, what some may think of with autism as a lack of being in tune with things, he actually has a heightened sense to things. He is selective with those things and his selectiveness often causes him to perseverate on details, and this defintely makes him stand out from the group.

He often tends to be on the outside looking in.

This makes me sad.

His doctor says "Its sad because he is so smart and yet, we have to teach him this part, and it doesn't come naturally and he has to work hard at the things that come naturally to others, just like some kids struggle with reading or math"

He uses echolalia to process information. I love this but it also makes him stand out. He speaks out of turn and gets excited and sometimes repeats things other kids say or do in an excited manner that is not in context.

He loves to imitate bad behavior. This drives me crazy. If another kid says something off color or is rowdy and causing trouble...Boy LOVES it.

I am extremely sensitive to my Boy. He is my love and when I hear things that are not happy regarding him, I probably am more emotional.
I am also extremely protective of him.


I am a social person and I want him to have friends and be happy. Mickey is more of an introvert and I know that there are many people who only have one or two friends and they are very happy...and if this makes Boy happy, then I am happy. BUT- if he is seeking interaction and getting turned away, then that makes me sad.

Mickey feels that he will be fine because he has good looks and is smart and athletic, and that will carry him pretty far...I think he could be right. But smart doesn't constitute happiness and I want him happy.

At my grandfather's funeral I encouraged him to go play with some other, older boys in the family. I watched as they told him he wasn't fast and they didn't want to play with him. I burst into tears, luckily people just thought it was because of the event we had gathered for.

I know that he has trouble with some of the boys in his class...they are boys and he is easy to get in trouble and he is easy to bully, and he doesn't always "get it" and will do almost anything foolish if he thinks it will include him. These are good boys, sweet boys and often they are extremely sweet to Boy. But other times they aren't. He never seems to play with the same kids and often plays with whoever happens to "like" him that day...sometimes they do like him...When I ask him who he plays with at school, every day it changes...because he doesn't have one steady friend who is always there.

Some days they apparently play a popular playground game called "run away from Oliver".

I asked him if they actually said 'those words' and apparently, it is the name of a game they play. I asked him how it made him feel and he said "It makes me really angry and I kick the mulch". Mickey told him that when they play that game he needs to NOT CHASE them and then it won't be fun to play...

I don't think he gets it though and will probably continue to chase them and ask them to "please will you play with me". (yes, this is what he tells me about). I feel very blessed to have a boy who opens up and tells us things when we talk with him. I also know that much of what he tells us is his perception, and unfortunately, his disability is based a lot on how he perceives things and perception accounts for much of what we get out of this life.

I feel very sad that he ever has to feel sad on the playground.


I know that going through these things will make him a more empathetic person, as you can only learn empathy by experiencing pain...I also know that we all experience these things and overcoming them make us stronger...

I just wish things could be different.

I remember being in the fourth grade and there was a paper passed around to sign up to be a member of the "I Hate ___ Club". I remember making a 9 year old decision not to sign my name. I know at that point that I knew it was a cruel thing to do. However, I also remember leaving friends out,and often hurt the friends closest to me. I think it is easiest to hurt those closest to you because you know where their soft spots are.

Unlike Oliver, I always had a few people in my corner...yes, we fought, but we always had each other. I never had to worry whether they'd like me the next day.

Some of my best friends and I have known each other nearly all our lives...being friends when we were Boy's age. We are close because we overcame. We are friends because we had to learn to forgive and ask forgiveness. There are some things, deep things, that come to surface during our chats, that we have to ask forgiveness for still...some things 20 years old that we recall and have to say "hey, remember junior year when _____, that really hurt me."...

I feel so blessed to have friendships where forgiveness is unlimited and we can be open about our pain and our shortcomings.

I have failed many friendships and I have lost some that have never returned, and I don't believe in the "if it doesn't return it was never meant to be"...I don't believe that. I still grieve lost friendships...because I love people and if any of those people ever read this, I will go on record right now by saying "I am sorry and I miss your friendship".

Today I went on a field trip with Boy's class and we saw Rainbow Fish. It was really cute and had a hymn like song about sharing your gifts, and also had a song about seeing yourself through one another...I felt happy and sad because I want my Boy to have friendships that reflect the best in him.

I may not leave this post up long because of the sensitive things I said about Boy...

But I do ask for prayers for him, that he will find lasting friendship and lasting love, the way I have been so blessed to have...because those relationships are what makes this life so very beautiful.


So, how does this relate to the initial post above...UBUNTU...may we all remember that we will only be truly happy when we create happiness in those around us. Rainbow Fish learned this today and its a lesson we can always be getting better at.

Posted by TheLFamily at 8:11 PM