Circle it and Cross it Out 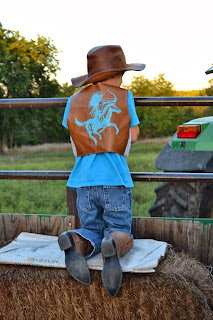 This Boy! He is truly amazing. The other day at dinner, he saw a Longhorn skull on the wall and said "so...is this a Georgia O'Keefe?"

He says funny things like "Count Me In!" when we ask if he wants a milkshake and "of course I did", when asked if he did a chore, or "Bingo!" when we answer one of his questions correctly.

He is so smart and has an excellent memory and he constantly amazes us. His little mind is always going and sometimes I have to tell him to relax and calm his mind. I get exhausted sometimes thinking about all that is going on in his head.

He does get nervous and he has chewed his little nails since he was two years old. I actually got out of the habit of even paying attention to whether or not he needed his nails trimmed. The other morning I was holding his hand and I noticed that his nails were actually quite long.
I said "When did you stop biting your nails?"
Boy: "I quit when I crossed it out..."...he went on to talk about other things and I reeled him back in.
Me: "what do you mean 'crossed it out'?"
Now this is where it gets amazing...
Boy: "I just decided I didn't want to do it anymore, so I drew a picture of it, I circled it and then I crossed it out. Then I stopped doing it."

Maybe its because he is mine...but I find this to be a fairly grown up way of dealing with things and a pretty interesting concept for a 6 year old child. Well, maybe not so grown up, because very few grown ups could actually stop doing whatever it was they crossed out.

I think it is incredible that he made this decision to stop nail biting all by himself, and took it upon himself to figure out a way to deal with it without ever mentioning it to us.

He is one insightful kid and I think we could all learn something from his simple concept. So...many months ago by girlfriend taught me to look at what I wanted and circle it. So, I mentally have circled a Christmas card photo for 2013 with Auggie in it since last year. NOW, I have a new way to mentally deal with things I no longer want in my life. Picture it, circle it and then Cross it out.

Posted by TheLFamily at 7:00 PM