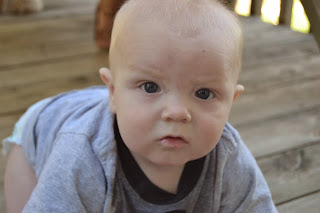 Tomorrow marks the one year anniversary of the worst day of my life. It was the day we sat in silence as doctors studied our son.  It was the day that doctors told us our son would not survive. It was the day we were told that the standard of care for his condition was termination, and that would end his suffering and avoid prolonging ours.  It was the first time I had ever heard of non-immune hydrops. It was the beginning of many months of sleepless nights and travel and doctors visits and ultrasounds and searching the internet for hope and praying and begging and pleading and........ This day marked the end of joy in my pregnancy. It took away all of my innocence that pregnancy was this beautiful thing that could be trusted. It took away my innocence that losing a child only happens to other people. It took away the notion that I truly had any control over my life.

I've been dreading this day.  Not only because of all of that, but also because it is the same day we drive to Kansas City to take that same sweet baby boy, the boy who lived, to the pulomonogist. We still know little about the chyle leak that caused his hydrops, or the lymphatic malformation that causes his residual lymphedema. We know he is healthy and meeting all of his milestones. His arm does not seem to hold him back or cause him discomfort. But he does has a very odd cough that occurs frequently and does not seem to be related to any illness. He coughs when he laughs. He coughs when he cries. He coughs when he gets frustrated. Sometimes I think he is fine and this is just the result of having sick lungs in utero. Other time I feel my chest tighten and wonder if I am being naive and that we have many more mountains ahead of us. So...its time to get checked out and find out.

On one hand, maybe this office visit being on this anniversary is a good thing. Certainly we have been blessed with this little man who is affectionately called a "Little Wave" in my support group, due to overcoming an ocean of odds to be with us. This visit does remind us of how far we have come this year. On the other hand, I am scared, nervous and anxious. If you can say a prayer for us, it would be appreciated.
Posted by TheLFamily at 12:18 PM