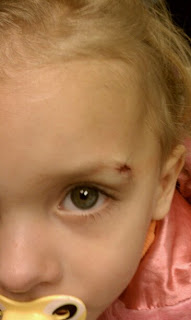 The kids had a little extra energy also...and they were pretty much running wild while Daddy waited for the game to start and I made dinner and washed dishes.

Running, yelling and then, inevitable screams. This is pretty much routine in our home...

Bluebird, who may get a name change soon to Bruiser, had her second ER visit...that girl has spent more time in the hospital in her two years than I have in 34.
Go figure that she would choose the one day that the roads are covered in 6 inches of snow...
I considered gluing it myself...Daddy asked me to stitch it...does he honestly think I would ever consider stitching my own child, with no meds and sewing thread? Not a chance. I may be a medical professional, but I am all mother when dealing with my children. If they cry, I cry. I'd never be able to stitch for all the tears blurring my own eyes.

Anyway, here is my girl and all I could think was what kind of scar this would make and of all the people I know with eyebrow scars and I knew we had to suck it up and get the girl to the ER.

She is a lucky one, because Daddy is an Oregonian (Go Ducks) and this snow really didn't phase him too much.

So...I put a Lightening McQueen band aid across the wound, we bundled her up in snow boots and coat...and she said ..."Go to doctor for eye".
Being the mother I am, I had a brief thought they could get stuck in the snow for days and freeze (as IF we were IN Oregon), so I grabbed a gallon of water, a box of cheeze-its, a cup, and two blankets...just in case...you can never be too safe, right?.

I stayed home with Boy who showed me exactly where Bluebird bonked her head. He also told me how "The Good Guys Rule and Good guys get the girl". I said "Who is your girl?" (I expected him to say Mommy)...but instead, he said "Bluebird is my girl".

Daddy and Bluebird made it to the ER without a glitch and she earned three stitches and some M & Ms.

When they got home Boy was waiting...the first thing she said was "Where is Boy?". She was so eager to tell him all he'd missed. "Boy, blah blah blah doctor blah blah blah hospital blah blah blah face." He ran to her and looked at her stitches...Then Bluebird AKA Bruiser opened her arms wide and gave her Boy the biggest hug ever. He kissed her.

This was repeated a few more times before I got them to bed.

Life is Good.
Posted by TheLFamily at 7:45 PM