What they are doing NOW. 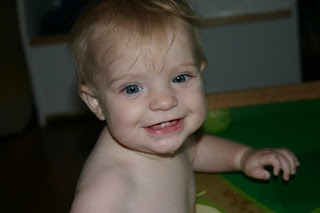 Buttercup: 10 months old. She has 6 teeth, but her two top front middle teeth are coming in a bit after her two top canines...our little snaggle tooth. She just started clapping on her own. I don't even think we remembered to teach her...and she just figured it out and started clapping. Also, when we ask her where her Daddy is, she puts her arm out and leans towards him in a type of 10 month point.
She doesn't do that for me...but when I am home, she clings to me and if anyone comes too close, she smiles, but nuzzles her head into me to let them know she isn't going anywhere. She doesn't sleep through the night...but gets closer, sometimes. Her hair is getting blonder and seems straight like Boy's. Her eyes are a crystal blue.She stands for a few moments on her own, and it is so cute to watch her elan into the toy box to check things out. 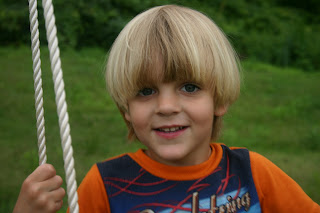 Boy: 4 years and 3 months old. He goes from super hero to Cars to trains.I love listening to him reason and talk through things. He tells Daddy "You're the guy, You're the one". He knows what all his letters look like and what sound they make. He knows what letter all his friends names start with. He is still shy and quiet, but he pays close attention to those details. He always talks about his "Grandpa"..."My Grandpa will be so proud of me", "My grandpa's name is Crazy Pa". In baseball, he really just wants to goof off with the other kids...and tends to gravitate towards all the negative behaviors. He thinks they are hilarious. He doesn't sleep through the night either. He always makes it into our bed and by my side at some point. He loves to sing but really only does it for me. I feel blessed to know these little sides of him he won't show anyone else. If he gets hurt, he says "I don't need a band-aid"...he doesn't like his hair cut either, but he will say "Mama, you can cut my bangs and then take me to the store" (letting me know he can be bribed)...he is a bit spoiled and when we drive past Target he says "There is my store, that's where my toys are". 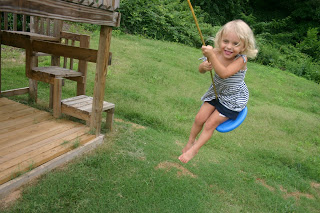 Bluebird: 2 years 10 months old. She is completely potty trained...except she doesn't want to poop in the potty, instead she walks upstairs and puts a pull up on. She is so smart that we are constantly stunned. She is becoming more dramatic, but mainly when I am around. She still sits on the counter in the sink while I get ready for work in the morning. She has ruined two baby dolls wit markers and pens...one of which was my baby as a child. She just likes to "color". She is funny and knows way more about super heroes and cars and trains than any little girl should. She can hang with the big kids. She likes to swing high, run fast and get dirty. But she still swirls in a new dress and loves her pedicures. She has No fear and we are constantly working to keep her safe...a challenge. She also loves babies and at night she covers herself with everything she owns. She is generous with hugs and kisses and kind words. She usually sleeps all night in her own bed, but when she does come into our bed, she brings along about 3 blankies and all the stuffed animals she can carry. Her smile is so big that it takes up half her head when she laughs. Her eyes are the color of the ocean after a storm, a kind of dark teal. She is full of encouraging words and is constantly telling boy that he is a super hero, or good baseball player. She loves Boy. Daddy threw a toy in her direction earlier in order to move it out of the kitchen and she said "Daddy, good throw". She likes to play on the stairs and all too often there is a whole little set up right on the stairs of kitchen stuff or cars or other toys. My cousin is staying with us and she found a few toys randomly selected on the hood of her truck, compliments of Bluebird.
Posted by TheLFamily at 7:33 PM