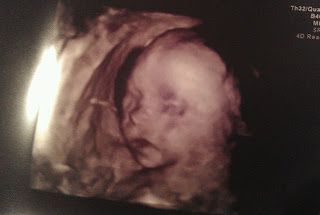 Today was a long day full of many emotions...but I am proud to say I think I only actually cried once. I think that may have been because we were just too busy to do much crying.
We had our ECHO this morning with a doctor named Austin Raunicker. We loved him, by the way. Not only does he do missions in Viet Nam, but he seemed to totally support our decisions to exhaust all resources to save Auguste.
He studied the heart for a very long time and could not find any abnormality. In fact, both he and the fetal maternal doctor said "beautiful actually" when it came to describing the way it was working.
He told us that there was an "impressive mount of fluid compressing the lungs, but it was not compressing the heart at this point, but that the one positive thing he could say was that this was a "very vigorous baby boy" and that was "uncharacteristic  for a hydrops baby", as usually they show little or no movement. We told him that we wanted to do all we could for this child and that he was wanted and that we wanted to be aggressive. He sat down with us and said that he and his wife would be doing the exact same thing and do everything that they could to save their child's life.
He told us that there were many children alive today because their parent's were willing to do anything, even innovative techniques in order to save them, and that Auguste was lucky to have us as his parents. He said it was always better to go down like a lion that passively like a lamb. He gave us his phone number and cell number and told us that more minds were better than one, and that although he could find no abnormalities, he was not offended by having the other experts double check him and even wanted us to do another ECHO with his partner next week.
We really liked him because he seemed to understand us from the heart of a parent.
The sonographer then came in and gave us a warning that the fetal maternal doctor that was coming to see us was new to us, and that he was "very direct" and not very social, I don't want to go into his name, but it was ironically the opposite of "direct". Anyway, he came in and basically said "what is this you are talking about, shunt?" Maybe he hasn't heard of the shunting, but ....well, I replied that although we knew it wasn't standard of care, that we have read success stories that involved doing this. He told us that he believed in 'do no harm' and that it was possible the fluid could return in a day. I said that in fact, this had happened, but was no so in every case I had read. He then went on to tell us about all that had returned test wise and how everything thus far was negative, he went over the results with me and let me know that they could not find anything else wrong with baby, no skin edema, normal placenta, normal amniotic fluid, etc. He then said, "you know, this can get worse very quickly."...I said "Or it could start getting better."...He said "yea, wouldn't that be something if it just got better."...I reminded him that this has happened. He then went into how unfortunate this was that we had three normal pregnancies and that this would happen now. I asked about C-section vs vaginal birth and he said they may have to consider Csection if we get to that point and how unfortunate to have to have that after three vaginal births. I said, "well, this is our last baby, we planned this and we don't really care what we need to do, a Csection is the least of our concerns."...he walked to the door and turned around and said "you know the baby could die at any time right?"...

I said Yes, and Mickey said we should have reminded him that so could he!

Basically, that was a day of mixed emotions and unfortunately, we either meet with doctors who support our advocacy, or ones who think we should have just terminated the pregnancy and don't expect much to result from it.

Mickey spent the rest of the day looking up centers that have done the most research on hydrops and he came up with:
University of CA, SF
CHOP, Children's Hospital of Philadelphia
University of Kansas
Toronto

He immediately called CHOP and they asked us to fax our information directly over, and even called us this evening to discuss their thoughts.
We also called San Francisco and they want our information faxed tomorrow as well. She was very nice and actually said that they would look it over. She did give the disclaimer that often times they do not shunt or do thoracentesis unless they feel the lungs are the source, which is sometimes apparent from one side of the chest filling up before the other side. This discouraged me because I don't think this is our case, but we will fax the info and see.
However, CHOP called us tonight and went over all the details and we told her our thoughts and the discussions we want to have. She said they actually have co-managed cases with Levine (the center we are going to on Wednesday in Charlotte). However, she stated time was of essence and they wanted to see us Friday. FRIDAY!!! Wow.
So, this is obviously difficult for everyone but I am fortunate to have a mother who is coming up to watch the kids and make sure they stay in school, etc. I will need to make sure I get her on the school list because I don't think she is an approved guardian since she doesn't even live in the state. She is talking to my step dad and making a plan to get here.
I texted my manager, who will of course work things out, even though I know it will not be easy on her. I am fortunate to have an understanding team of practitioners and am reminded once again why I chose to move to Greenville to work for the cancer centers.
Mickey is looking for plane tickets and hotels and we really have no idea what happens next. At the very least, they say there is nothing to do but wait, and we know we have spoken and been evaluated by the leading people regarding this.
It is stressful as it seems that there are so many causes to hydrops, and so many cases that go unsolved, and so many deaths, that there are still very few answers and only a few techniques thought to be useful.
Therefore, we are still awaiting a miracle. We are still holding out high hopes that our "vigorous boy" will fight through this and having faith that he will survive this.
I look at his sweet face above, his pointy chin, and the way he looks like Oliver, the way he looks like me.

Please continue to keep Auguste in your prayers.

Posted by TheLFamily at 4:38 PM